Whether caused by inconsistencies from your utility, a big storm or sudden surges in power draw from non-linear load equipment, a power disruption can affect the quality of any metal additive manufacturing (AM) build. Such a disruption can cause a drop or surge in laser power, or momentarily shut the machine off, creating defects in the build. If this occurs toward the end of a long build cycle using expensive powder—well, you get the picture. Time and money down the drain, and a customer relationship damaged.

As a case in point, consider a testimonial from GE Aviation explaining the benefits of its investment in uninterruptible power supplies (UPS), devices installed between prime power input lines and printers to condition the power and to also provide backup power, as a bridge to a generator, if needed. A GE Aviation facility installed, in 2018, a UPS system to avoid fire due to excess heat from power surges and spikes, threatening loss of production; operational losses and unscheduled downtime, at a cost of $200 to $400/hr.; productivity losses of 12 to 18 hr./person or $100 to $300/resource; and product loss to the tune of $15,000/event, times the several machines used at the facility. (More on this case study later.)

A Backup Generator is Not Enough

To gain a better understanding of the critical role a UPS can play in maintaining a successful metal-AM process day in and day out, we spoke with Patrick Gannon, additive segment leader at ABB Inc., which acquired the GE Industrial Solutions business in 2017.

“Your utility contract typically calls for 99.9999-percent uptime,” says Gannon, “which sounds like a lot. However, that allows for a couple of downtime events per month, quarter or year, depending on where your company resides in relation to the substation. The optimum solution for preventing a power blip from ruining a build is a UPS, the cost of which easily can be justified by avoiding just one downtime event.”

Most if not all manufacturers install backup generators in line, but those typically experience a delay before firing up. And generators don’t condition input power and so won’t protect a build from a surge or drop in voltage. The UPS does both—power conditioning and serving as a battery-driven power backup until the generator comes online.

“Power quality is relatively new to this industry,” says Gannon, “and as AM shops begin to experience build problems, they typically call the machine OEM. We see that many of these quality issues relate directly to power blips, and so we encourage OEMs and their customers to conduct power audits to look for power anomalies.”

In fact, some OEMs, including Concept Laser and Arcam, says Gannon, have begun to include a UPS as a standard part number in their quotes. In some cases, OEMs can extend their warranty by including a UPS.

Gannon adds that retrofitting of UPSs to existing machines represents about 90 percent of ABB’s market for this technology, the rest sold at machine install by the OEM.

“If a shop is suffering from nonperformance issues, experiencing nuisance breaker trips on the distribution panel—these are signs of power surges,” he adds. “If you can’t find other reasons why builds are flawed and you’re following all of the recommended procedures, look at lack of power or unconditioned power.”

While avoiding operational-related losses more than justifies the added investment in a UPS, Gannon also stresses that a UPS will extend the life of the components it protects—the lasers, compressors, heat sinks, heating elements and other motor-controlled loads associated with the build.

“We say that the UPS provides 100-percent protection with zero downtime and zero transfer time from anomaly to power protection,” he says. “Some setups with interruptible power supplies can cause a delay in protection of 2 to 4 msec., and the damage is done.”

Back to GE Aviation

Gannon reflects back to the GE Aviation installation, where each of its 20 metal-AM printers builds six turbine blades at a time, over a three-day cycle, and notes that each titanium-alloy blade costs upward of $5000.

“That facility could lose as much as $600,000 from a power anomaly," he says, "and a three- to five-day delay in production. Here, rather than install 20 separate UPS units (sized at 20 kW typically), we installed one large 400-kW UPS in the electrical closet. And, in fact, we added a second 400-kW UPS for redundancy.”

Bottom line: “Too many AM sites believe that if they have a generator backup, they’re good to go,” Gannon says. “But a generator only serves as an emergency power source; it won’t condition the incoming power, and there’s a delay in starting up the generator when power is interrupted, which will cause flaws in your builds. Place a UPS in line between the generator and the AM machine to avoid flawed builds caused by power anomalies.” 3DMP 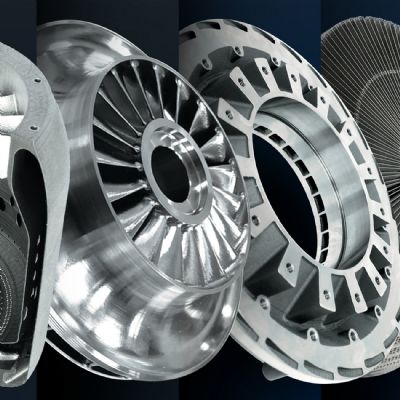 
Successful Metal-AM Builds Are No Accident: The Value of In-...


Hybrid Metal-AM Technology on the Move