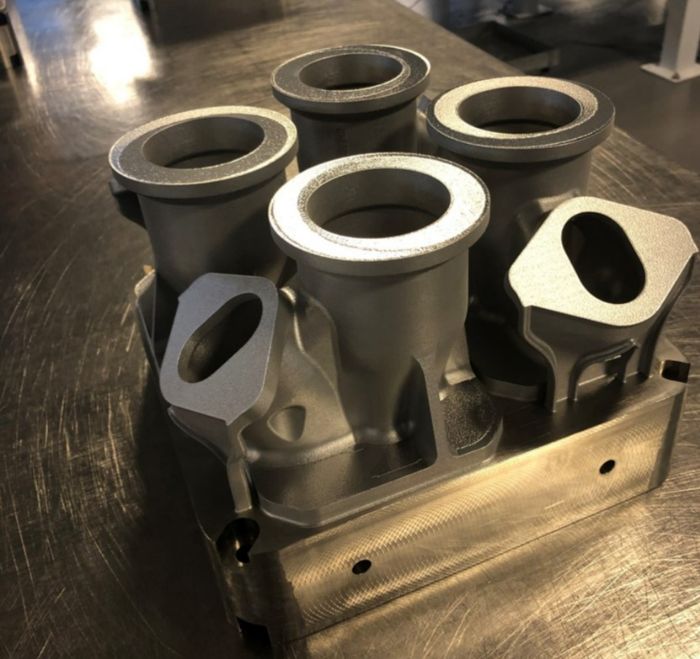 A collaboration between GE Aviation and GE Additive has resulted in a switch from investment-cast turbine bleed-air parts to parts made via additive manufacturing (AM), with cost savings expected to reach 35 percent. The conversion, a 10-month process stretching from identifying target parts to 3D printing final prototypes, compares to a casting process that takes 12 to 18 months or more, according to GE Additive officials.

“This is a game-changer,” says Eric Gatlin, AM leader at GE Aviation. “This is the first time we did a part-for-part replacement, and it was cheaper with AM than with casting. To ensure cost-competitiveness, four outside vendors quoted the parts and we still came in lower with AM.”

And, the project team reportedly has identified scores of other parts on a variety of engines that can be converted to AM with cost savings. GE Additive’s Concept Laser M2 Series 5 AM machine, with a 21,000-cm3 build chamber, offers a prime opportunity for such conversions, GE Additive officials claim. Its dual lasers melt and fuse metal layers quickly while producing consistent results for complex builds. The M2’s lasers, available in 400-W or 1-kW power, produce 50-micron-thick layers.

“(In this casting-to-AM project) we said up front that we were going to select a material that we already had qualified,” Gatlin says. “In production, we opted for the M2 because we know it well. And, we were not undertaking any wholesale design changes, just some tweaks to allow successful printing. We simplified as many steps as possible to allow the team to run fast.”

The project team developed final prototypes between April and September 2020. Although all four parts were slated for the LM9000, a land/marine turbine derived from the GE90 turbojet, which GE Aviation is building for Baker Hughes, the group also considered dozens of parts for older engines and products.

“Our goal always was to look at ways to disrupt production,” says Joseph Moore, a senior project manager and project lead from GE Aviation. “Only a few suppliers make investment castings for the aviation industry, so we must have options to ensure that we’re not impacted by obsolescence and reliant on the cost models of specific suppliers. If we can make an additive part for less, we can save money now and avoid future cost increases.”

The path to choosing those four AM parts began in early 2020 with GE Aviation’s annual audit of castings.

“We always look to pull costs out of existing products,” Gatlin says, “so we cast a wide net that includes hundreds of castings that we buy. Then we ask, ‘Are we getting more competitive?’ ‘Are there things we couldn’t do a year ago that now are technically feasible?’”

The vetting process considered both new and older products, and a variety of factors, such as the capabilities of GE Aviation’s 3D printers, as well as part size, shape and features. By February 2020, the GE Aviation team identified 180 cast parts as cost-saving AM candidates. Then, a team of GE Aviation and GE Additive engineers split into small groups to calculate the ROI on printing each part.

Then, COVID-19 upended production worldwide. At GE Aviation’s additive production facility in Auburn, AL, the pandemic presented an opportunity for the team to focus on other projects. Unexpectedly, machine and post-processing time became available, and this part project was born to take advantage of that availability.

From the original 180 parts identified as AM possibilities, the project team narrowed the number to nine, including parts from other marine-industrial gas turbine engines, regional jet turbofans and some military programs. These nine parts all were made from CoCr or Ti-64 alloys.

The team then narrowed the parts list further, prioritizing parts-based engineering resources and the importance of cost savings to the engine program. It settled on four parts--adapter caps for the LM9000’s bleed-air system, all measuring about 3.5-in. dia. by 6 in. tall. CoCr was selected as the part material—it could best handle the hot compressed air in the turbine’s compressor section.

From a manufacturing standpoint, the parts shared a base geometry and similar features. The team assumed the M2 could print three parts simultaneously, but engineers soon redesigned the layout to produce four at a time.

Simulation and analysis showed that the AM parts performed in service the same as the cast parts they replaced, according to Steve Slusher, a GE Additive manufacturing engineer on the project. The team also built test bars with each print, enabling technicians to measure the integrity of each production run.

This successful project marked the first time that GE Aviation shifted production from investment casting to AM based strictly on cost. The parts, one-to-one replacements, underwent no redesign or consolidation to improve economics.

“This project showed me that we could take an existing casting design, replicate it quickly on our printers, and within weeks of starting on the project the final parts were the same quality as to their cast counterparts,” says Jeff Eschenbach, a senior project manager and project lead at the Auburn facility. “This project serves as a template for future work.”